On Posted on February 14, 2013August 7, 2020 by Michael Cuenco to Changing your brain, The nature of thought

Here’s how to change your brain

As you’ve no doubt noticed, I talk a lot about thought. 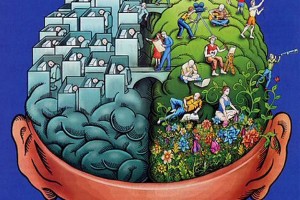 We are not our thoughts. Our thoughts are not us. Thought is habitual and über subjective.

How to detach from thought. The value in observing thought without judgment.

You get the picture.

Aside from the amazing freedom you find when you stop taking all that mental chatter as truth, there is another very practical and almost as awesome benefit: you can literally change the way your brain is wired.

Here’s how, in a nutshell:

Let’s say you have a cupcake habit (feel free to substitute tequila, twitter, sex, crack, or whatever your particular poison happens to be).

You have sudden, overwhelming urges for cupcakes somewhat regularly. When an urge strikes, you feel powerless against it. You typically give in to the urge and have your cupcakes.

This habit is beginning to affect your waistline, your health and energy levels, your finances. Maybe most of all, it’s scary and frustrating to feel so out of control over a cute little mound of flour and sugar.

You often obey your urge to eat cupcakes and each time you do, you reward the part of your brain that sends out the urge. It’s just like if your kid throws a tantrum because he wants a toy…and you buy him the toy.

You may only be buying him the toy to stop the tantrum. Because you can’t take it anymore and you want him to get off the floor already and stop making a scene (I’m not speaking from experience or anything).

But each time you reward the tantrum, his little brain strengthens the connection “flail on the floor screaming” = “Get what I want”.

This is what happens each time you follow through on your urge for cupcakes. You affect your brain in a way that makes it want more cupcakes.

The Urge isn’t You

When that voice in your head says “Cupcakes. NOW” in that very serious tone it tends to have, you obey. But why? Like in the tantrum example, you want the voice to stop. One way to quiet it down is to give it what it wants.

You might also obey because you believe that voice has a legitimate need. It certainly feels that way. Except there is never an actual, biological need for a cupcake.

Or maybe you believe that voice is you. Maybe you think it’s your voice, and that you desire cupcakes. Except that voice is not you. Nope.

That voice is coming from a very old, unthinking, illogical, automatic, survival-based part of your brain. Some people call it the animal, or reptilian brain (because they have it too).  Your animal brain believes that cupcakes are essential for your survival. That’s why it urges you to eat them so quickly.

There is a conscious, thinking, deliberate part of your brain responsible for those things. That newer, in-humans-only, logical, intelligent part of the brain makes decisions like ‘to eat or not to eat’.

The problem is that your logical, human brain has been obeying orders from your animal brain as if they were meaningful. As if it had no choice because those urges sound oh so persuasive.

When you realize that those urges aren’t meaningful—they are simply associations in your animal brain that don’t signal a real need and don’t have to be obeyed—your human brain can choose to ignore them.

They are just “neurological junk”. Animal cravings gone wild. They are not you and they are not actually helping you survive.

The really cool part is that as soon as you realize this and start ignoring those urges, they quiet down. Like, quickly. As soon as you successfully ignore a few tantrums, the kid very quickly learns it’s a lost cause (from what I hear, anyway).

Your brain rewires around your new habit of not eating so many cupcakes.  The change is real, deep, and long lasting because the old associations are extinguished.

Like I said, this is how you change your brain to stop old habits or start new ones, in short. It’s the embarrassingly simplified version.

If you’d like to learn much more about the exact steps to changing your brain, you might enjoy the telecourse I’m teaching beginning Tuesday. It’s called Fighting the Urge: Changing unwanted behaviors Once and for All.

I’ll be outlining the 4 essential steps to noticing, separating from, and reacting to urges, as well as coaching participants personally, if they so choose. I can’t wait to see what change we can make on these calls.

PreviousPrevious post:A story about presence: Traveling with my kids
NextNext post:How much pleasure will you allow?