Where did we get the belief that we’re supposed to always feel good? 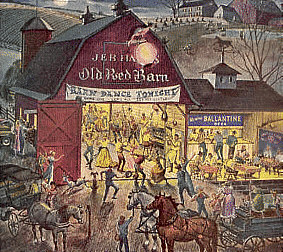 We’re not. Feeling like shit once in a while makes our life so much better. It provides contrast. It shows us what we don’t want and motivates us to find what we do want.

In nature there is chaos before clarity. The caterpillar dissolves into goo before it becomes a butterfly; the violent storm is followed by an almost eerie peace. The same is true for us.

If you’re feeling especially lost, directionless or uninspired, that means something better is coming. In order to make a giant leap in your mindset or expand your identity, the old stuff has to come down. We have to walk through the Ring of Fire. It burns like hell, but sometimes you need to just burn the barn down and start over instead of trying to fix the walls that are made of rotting wood.

The interesting thing about this whole burning down and starting over process is that it can be really painful if you let it, but it doesn’t have to be. If you recognize it for what it is and know that it’s leading you closer to the Promised Land, it’s not so bad. It’s still not comfortable, but not quite as scary.

Shifting perspectives is tiring emotional work. When people start making major changes in the way they see the world and what they believe, they very often feel physically tired. Sometimes they feel like shit. That’s an excellent sign.

Retreat. Rest. Let yourself feel like shit and don’t try to rush out of it or tell a story about it. Just hold on tight and know that even as your identify bursts into flames around you, the next step is rebuilding the barn. And the next step after that is having a big barn dance to celebrate how much better the new barn is.