You’ve heard we’re all connected, right? I remember the first time I heard this. In a quantum physics-type book during my first year of college. We’re all connected? What does that mean? You mean I’m not my own completely independent individual? Not an island among other islands? 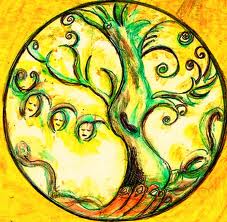 We’re all con–nec–ted. We know from physics that separateness doesn’t exist within physical things (‘solid’ things aren’t, really); the same is said to be true of individuals and our own personal boundaries. Our separateness is an illusion.

Hearing that, I instantly knew it was true. I didn’t fully understand the science behind it. Still don’t. But I knew in my gut that it was true and I didn’t need external proof.

Since I’m trained as a scientist, I like to have the evidence. Double-blind studies, proper conditions and controls, statistical significance and p <.01; I really like all that stuff. But when something is true in my gut, I don’t need it.

It’s the science vs. belief or faith issue. Personally, I’ve never understood the struggle. There is truth you feel in your body and truth via evidence that you take in with your mind. They’re two different things. At any rate, I always like to have the science in my back pocket, just because I’m into that sort of stuff.

Turns out, there is a lot of science supporting the We’re-All-Connected theory. A Lot. Some of my favorite studies are the ones that Dean Radin summarizes in his book, Entangled Minds.

For example, there are studies showing that when the collective consciousness is all focused on one thing at the same time (like on 9/11, when Princess Diana died, and during the finals of American Idol), other things in the universe that are supposedly random get thrown off as a consequence. Because we’re all connected. Random number generators, for example, start spewing strings of 0’s or 1’s in non-random sequences to match the non-random nature of our global attention in those moments.

(Radin also presents scientific studies of remote viewing, clairvoyance, and the power of intention. Unbelievably fascinating book. I’ll stop with the research for you gut-trusting types, but check out the book if you’re into it.)

Back to us being connected…

So, We’re-All-Connected kind of explains a lot, doesn’t it? Like why it hurts us so much when we hurt other people and why it feels so good to be kind to others.

What I give to you, I actually give to myself.

It also explains the power of prayer. Many scientifically reputable studies have shown the effects of prayer. Not just religious prayer (although that works, too), but focusing on outcomes for far away others and sending positive energy to them through our thoughts.

My thoughts influence your life, and vice versa. Logical, when we’re all connected.

There are a lot of things that make sense in this connectedness framework. I have a list, but I’m saving them for later because I’m supposed to be making these blog posts short. They’re supposed to be my gut-knowing truths, not mental research papers.

So I’ll leave you with this question, for now:  How might your interaction with the world be different today if you go out there believing we’re all connected?

Afterword: Absolutely true story, so help me God. As I was finishing the first draft of this post, my husband walks in the room and says, “You know what I was just thinking about? Those studies with the One Universal mind and how those random number thingies went wacky when Princess Diana died.”  For real. We often read each others’ mind but that was insane. And it also makes perfect sense.

More on Patterns…What I learned from the Horses

TagsconnectedconsciousnessDean Radinillusiononeonenessseparateduniversal
PreviousPrevious post:Do You Care what Other People Think of You?
NextNext post:The Small Stuff of Happiness