I have serious issues with clutter. I hate it; makes me feel icky. When I’m visiting someone who has a lot of stuff—and that stuff is out where I have to see it—I get claustrophobic and start looking for the door. 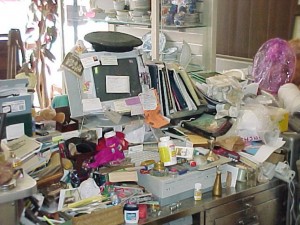 I’m talking about physical stuff, like those old plastic cups that came from the gas station, or mail, or old magazines.

I’m also talking about mental stuff, like rigid beliefs or habitual thoughts that go unquestioned and by default become “truth”.

At any rate, when there’s too much stuff, there’s no room for new and improved. You can’t get a new mattress when the bed’s covered in crap. Profound, I know. You also aren’t going to have many creative insights or epiphanies or experience new emotions when your mind is covered in crap.


Or as they might say in Feng Shui (is that an official language?), clutter blocks the energy. There’s no more flow, just a logjam of old, useless stuff holding you back and not allowing you to receive more—or better—or both.

Giving physical stuff away makes me feel mentally and emotionally clean—it’s basically a cheap and easy form of therapy. Of course, the most effective form of psychological purging (most effective = hardest) is by showing up and working through your personal crap. But since they’re all related, purging in one area bleeds over into the others.

So if you’re stuck on where to start with your issues or you’re just too tired to tackle that monster today, purge some physical stuff. Take a garbage bag or a dump-truck to Good Will and notice what happens, what that makes room for. A new client, unexpected money, a really freaky happy feeling for the rest of the weekend?

In my experience, every time I de-clutter I allow for more and better. And it feels really good to not have the old stuff hanging out where it doesn’t belong.