Can We Really Have It All? Maybe. Here’s How. 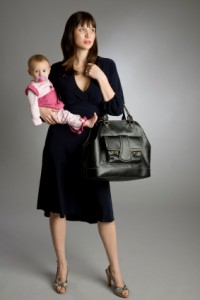 Martha Beck says: We can have it all…except sleep.

Courtney Martin says: They tell us we can do anything, but what we hear is that we must do everything.

So, can we have it all? I’m exploring this in my own life.

Wake up at 6, work out until 7, shower, coffee. Eyes glued to the baby monitor through all of these. The waking up, the exercise, the shower…all done in a race against the buzzer, where the buzzer = baby’s awake and trying to scale the railing of her crib. It’s Morning v. Willow.

She usually sleeps until 7:15. But on those random mornings when she’s up before 7 the routine needs to be adapted. Something’s gotta give, and I can assure you it’s never the baby. (Or the coffee). Chalk up one to Can’t-Have-It-All.

The next 90 minutes or so are spent getting her fed, diapered and dressed, and then playing for a while. That’s when the conflict really starts.

I begin checking emails, reviewing my appointments for the day, making my to-do list, all while Willow plays in the same room. Me on the laptop, baby wanting to be held or talked to or listened to. It’s Work v. Willow.

Although I’m an Olympic juggler, I’m also painfully aware that juggling means neither work nor Willow gets my full attention. The baby may be smiling and I may be sufficiently articulate in my emails, but the inner tug-of-war can quickly leave me feeling defeated. Can’t-Have-It-All –2; Can-Have-It-All –0.

At this point, you might be wondering what I want. Do I want to stay home with my baby or do I want to work? I want both.

But I want both 100%, not 50/50. I want to be Carol Brady (because yes, I also want a housekeeper), spending the day with Willow at the park, going on play dates, and putting on heels and make up just to greet my husband at the door with a martini at 5 o’clock.

And I want my career, full-out, no distractions, no pumping or nursing breaks, no need to rush home by 5. I want to travel, and talk to interesting people at coffee shops, and collaborate with other coaches, and write until 2am and sleep in until 10, and coach, and blog, and tweet.

I don’t want to dabble in motherhood and have a half-cocked career. No way.

And I definitely don’t want the Academy Award for juggling anymore. I don’t even want to be nominated.

The Solution. Or getting closer to one, anyway.

As I’ve discussed before, you kind of have to actually think about and write out your values. Assuming that your life is already a reflection of your values doesn’t cut it.

I’ve learned to say no to anything that isn’t in line with my values. It’s not always easy to say no, but there’s just no way I’m going to take away from what I deeply value just because I’m afraid to disappoint someone.

If someone asks me to spend my time doing something that I don’t truly want to do, I remind myself that everything is a choice. Committing myself to one course of action closes the door to others. That means that doing the un-fun interview or taking on a pro bono client or cleaning my neighbor’s garage takes away from being with my family and doing work that I love.

It’s not about being selfish or unhelpful. There are many helpful, selfless things that I really want to do, and I do them.

It’s about know what’s really important to me and acting in service of those things. If my kid is important I’m going to prioritize my kid, period. Too many people talk about what’s most important to them and then ignore those things or take them for granted. They’re slaves to what less important people ask of them.

To Have It All, I’ve found I can’t do that. It just doesn’t make sense to ignore my highest priority values in service of something that barely makes the list.

This is how I’ve managed to get as close to Having It All as I can. I still have room for improvement, but I’m working on it.

How do you Have It All?

What’s the Value in Values?

Self-Love: To my Daughter

Why I Told the Truth

Tagsbalancecareerhave it allmotherhoodvalues
PreviousPrevious post:Taming the Thoughts with David Trotter
NextNext post:Do What you Want, When you Want to