Do What you Want, When you Want to

I haven’t been following my own advice lately. I’ve caught myself struggling through things that don’t feel easy or fun. And passing up things I want to do, so that I can do more of what I think I should do. 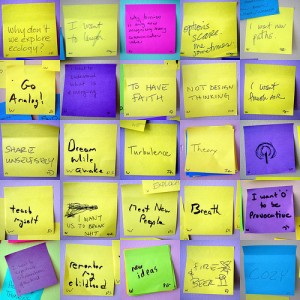 This way of being doesn’t feel good. It’s frustrating to muscle through tasks that feel hard when what I really want to do is read my new books or research green smoothie recipes or go for a walk.

And this way of being isn’t consistent with my primary value of freedom. When I’m awake enough, I try to let my values guide my choices.

Maybe most important, this way of being isn’t even effective so it really doesn’t make sense. It’s not like feeling bad or betraying my values pays off in the end because I actually get stuff done and make progress. Just the opposite, actually.

Here’s a brief sketch of how I think it really works (these ideas are discussed in more detail in Whose Underwear Are you Wearing, sort of a manifesto for the whole Achievable Enlightenment blog):

1. You play warmer/colder and do what feels best to you in the moment. In other words, use your emotions as guidance system—when it feels good, do it more, when it doesn’t, do it less.

2. Because your emotions are always guiding you in the right direction, know that doing what feels right and good in the moment is actually helping you get what you really want. Relentlessly plugging away at things you don’t want to be doing and that don’t feel good is not doing yourself any favors.

Geez…I can hear you screaming all the way in Chicago. BUT THERE ARE THINGS THAT NEED TO BE DONE!

To that I say use these guidelines on the less urgent things, then. If writing your mortgage check or pulling over when the cop is chasing you down the highway don’t feel good, suck it up and do them anyway. The consequences are worse than the discomfort of doing them.

But those are extreme examples and things in your life are rarely that extreme. If you stop trying to play devil’s advocate and try this out on things that are important but are slightly less urgent than those examples, you’ll see.

When it isn’t fun, do it just a little longer…

Writing is a good example in my life. When I sit down to write and it just doesn’t feel good, it feels forced and hard and like it’s not working, I keep at it just a little longer.

That part is really important.

As soon as it sucks I don’t walk away because the truth is, a lot of things suck at first. But if you take a little action through the suckiness, they start get easier and feel better.

So the question becomes: at what point do you walk away? You have to figure that out for yourself.

Sorry, shitty answer, I know. But you do. This piece of it is like a mirror for the whole process. You have to feel it out and find your sweet spot.

While I can’t give you specific time limits, I can say that for me it often looks something like:

Sit down to write, write some crap, look around, get more coffee, check my email, write a little more crap. At some point I usually decide that I’ll write for a specific amount of time (maybe 5 or 10 minutes) and see how it goes.

If I want to quit at the end of those 10 minutes I will without guilt. If on re-read I realize what I’m writing isn’t as crappy as it seems, or if the process is starting to feel a little better, I keep going.

If I stop, I do so knowing I did my minimum and there’s no room or reason for self-judgment.

When I keep pushing beyond my limit even when it still feels bad, I end up wasting a lot of time. I wind up with a lot of crappy words I eventually delete or just don’t use. If I would have just let it go for a while and did something I wanted to do, I would have come back to it later when it felt good. In much less time and with much less effort, I’d end up with some useable stuff.

That’s the theory, anyway. And when I’ve followed that formula, that’s usually how it turns out.

But man, it’s hard to let go and trust sometimes! Sometimes I want so badly to have written or to have made those phone calls that muscling through it the hard way seems like the better choice.

And that’s fine, I mean no one’s going to die or anything either way. As long as I remember that the end product probably won’t be the same. When it feels easier and it flows, it’s most likely producing a better outcome. When it feels like a struggle it’s usually not turning out as good.

Ever showed up at a job you hate day in and day out? Maybe you are now. I have. I sucked at that job. (Suck is relative and kind of personal and subjective, by the way. I won awards as a trial consultant but I still sucked at it relative to what I could have done if I had actually applied myself.)

Back to how this all started: I haven’t been doing so well at this, myself. I’ve been telling myself what I should do and paying more attention to external benchmarks and what other people are doing and recommendations and arbitrary numbers than how I feel when I’m really doing the thing.

So I’m going to keep working on rewiring that pattern and consciously remember to live by my underwear theory. Will you?

Being Unhappy in order to Get Happy

Faith it ’til you Make it

Tagsfeel goodguidanceinspired
PreviousPrevious post:Can We Really Have It All? Maybe. Here’s How.
NextNext post:5 Reasons to Write Things Down