What was the Big Ass Disaster (BAD) that shaped the rest of your life?

Humans assign meaning to everything. 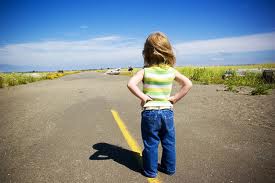 That’s what we do. Our brains are wired for it.

So here’s what happens:

A Big Ass Disaster (BAD) occurs when you’re a kid. It’s often the first really negative or scary thing you remember. (It might be a fight among your adults, or your dad moves out, or a sibling is born and everything changes).

For my client Rick, it was when he watched his mom have a stroke as she was ironing shirts and he and his brother were watching cartoons. He was 5; his little brother was 2.  Yours wasn’t necessarily that big or that bad, by the way.

In the moment the disaster strikes, your little kid brain makes is mean something. Specifically, you decide the event means something about you and/or how you have to be from then on.

Rick remembers realizing life was never going to be the same from that moment. As his mom lay on the floor, the hot iron sizzling through the shirts and his little brother crying and yelling for mommy to wake up, Rick decided he’d have to be in charge now.

At 5 years old, he also instantly realized he didn’t know how to be charge. So the meaning he created went something like this: I have to take care of everything and I’m ill-equipped to do it.

Those are the beliefs Rick made up in a split second when he was 5 and his mom was lying on the ground.

A 5 year old mind drew those conclusions, and an adult man has lived by them every day since.

By most anyone’s standards, Rick is an extremely successful man. He’s a leader in his business as well as in his family and community. With beliefs like, “I’m in charge now”, that’s not difficult to predict.

But he also has the constant, nagging feeling that he’s not ready for the challenges he takes on. He’s not good enough. He doesn’t know how. And those beliefs keep him swirling in a self-defeating cycle of doubt and fear. His typical pattern is that he steps up to the challenge, and then freaks out in anxiety and uncertainty about his abilities.

The conclusions that made sense to a scared little 5 year old completely drive his emotions and behaviors today.

Where are you a slave to beliefs you made up as child?

To find out, think about your own BAD. Go back there in your mind. Remember, it’s often the first vivid, negative memory you have. Very often you were between the ages of 2-5 years old. Not always, but if you’re coming up blank that’s a good place to start.

Find it? Good, now really be there. Try to see the scene, smell the smells, hear the sounds and most of all, feel the feelings you felt.

Be there a little longer. (I realize it’s not a fun place to hang out. The good news is that if it upsets you to think about the incident, you’ve probably tapped into the big one for you.)

In the moment the disaster struck, what were you feeling?

What were you thinking?

What did you tell yourself about fixing the disaster or preventing another one? Your little kid mind formulated a plan. Rick’s plan was to be in charge. What was your plan?

How did you feel about carrying out your plan? What did it mean about you as a person? How would your life change to support that plan?

In case you’re stuck, I’ll share another example. One from my life. It’s not my primary or earliest BAD, but it’s one off them… check out My BAD

How you do anything is how you do everything

More on patterns…what I learned from the horses

How do you win?

PreviousPrevious post:My BAD. As another example for you.
NextNext post:The paradox of self-help