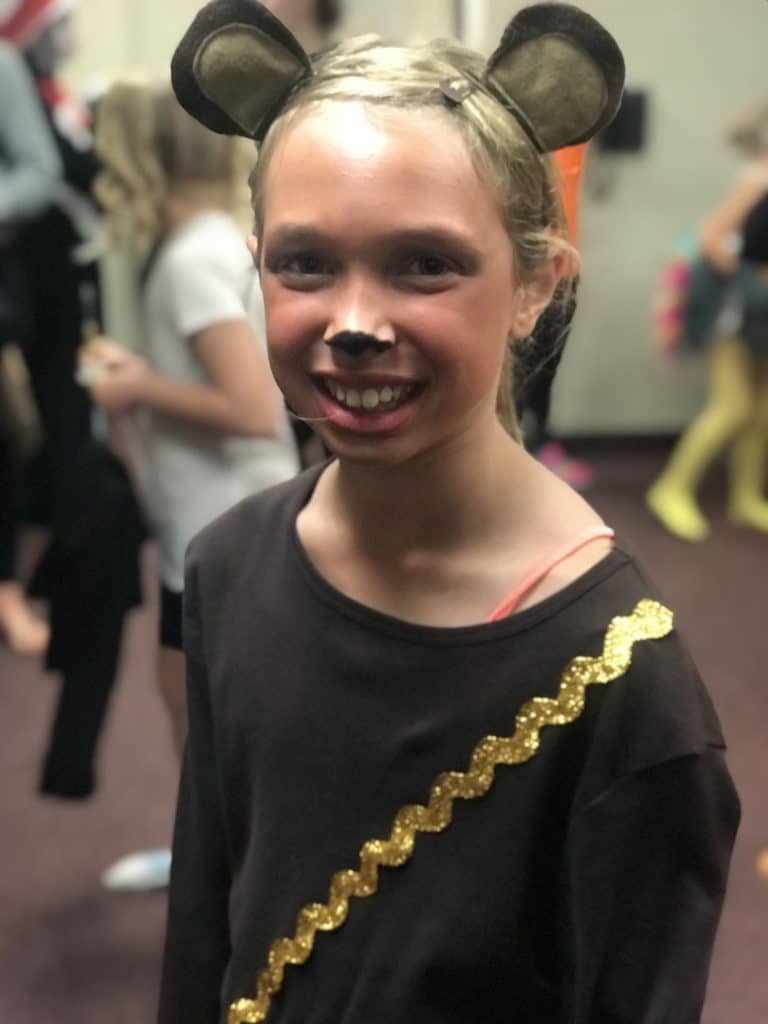 Willow is playing a Wickersham in Seussical the Musical Jr.  Thursday was opening night; the first of 9 performances she’ll be part of over the next two weeks.
This is her third production. She auditioned for this show in mid-August. The cast of 35 kids (ages 5-15) have been rehearsing at lest 6 hours per week since then…closer to 10-12 hours per week recently.
Every single time the lights go down and I watch these kids take the stage…in front of all of those people…doing the thing they’ve been working so hard at…I cry like a baby.
Especially when they take their bows at the end. And a standing ovation like they got on opening night? I’m a wreck.
You might think this is because my kid is involved. Nope. Every time I see a performance of any type recognized and applauded, I lose it. Olympics medal ceremonies, any rendition of pomp and circumstance, the finale of The Masked Singer…doesn’t matter.
I’m not alone in this, right?
We are bearing witness to creation. What is more holy, more moving than that? We’re watching life dancing through human beings, taking shape in unexpected, fresh, brand new ways.
We’re watching human beings (and therefore ourselves, really) put themselves out there. Playing the game of life in a big way, trying for things, failing thousands of times, continuing anyway.
We know we’re watching people who have grown and stretched and blown their own minds with what they can do.
I think when the audience applauds, what we’re applauding is life itself. We’re applauding courage and creation and playing with all that life has to offer.
Willow is not the best actor in the group and she’s not the best singer. But this girl has fun.
She is always smiling (she’s always been that way). She loves being part of the ensemble, getting on her stage makeup, riding to rehearsal with her friends, celebrating their performances afterward.
Willow loves being in the game of life. She wants a piece of action and it’s not about her. Before each audition, the kids are supposed to look over the script and list the roles they most want. There are boxes to check if they will accept a non-speaking role, or an off-screen part.
Willow checks every box. She always says the same thing: “I don’t care, I just want to be in the play!”
I can’t tell you how inspired I am by that. She reminds me that all roles in life can be fun. That there is joy in just being there, wherever there is.
She teaches me to check more boxes in my own life.
And she inspires me to leave it all on the stage without agenda or attachment.
What else are we here for?

PreviousPrevious post:EP63: You don’t Have to be Okay with your Experience
NextNext post:EP64: When Hard Things Happen with Teri Whiteman