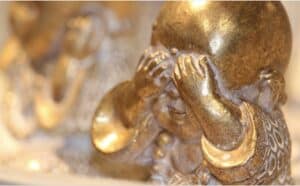 Somewhere around the 13th century in Bangkok, Thailand, a massive statue of the Buddha was made of pure gold.

Not long after the statue was created, Burmese soldiers invaded Thailand. In a stroke of insight, the Golden Buddha was covered in stucco and glass to hide its value and keep it safe from the invaders.

Who would want a heavy, huge, Buddha statue made of sand and dirt?

The invaders came and went, the statue was spared, and everyone who knew the true nature of the Golden Buddha eventually died. Then, in the 1960s when the statue was being moved from one temple to another, it was dropped. The plaster cracked and a pure gold toe shined through Buddha’s dirty façade. The crack in the façade meant the jig was up. The Golden Buddha’s shiny, perfect nature was realized. It’s nature hadn’t changed; the people were fooled by the façade.

When that scary event or early trauma happened to you, you retreated into your head. You looked away from yourself. You saw your stucco façade more and more, and your true nature less and less. You slowly but surely mistook the dirt and sand for who-you-are.

You slowly but surely forgot your true nature. As we do.

But nothing about who-you-are has ever actually changed. You’re as peaceful and connected to all of life as you’ve always been, you’ve just gotten into the habit of listening to your mind a little too closely. We mistake the stucco, the narrator, our conditioned, habitual, machine-like mind for who-we-are.