*This post is Part II in a two part installment on making choices. Here’s part I.*

Most decisions in life are reversible. If you don’t like the choice you made, choose again. 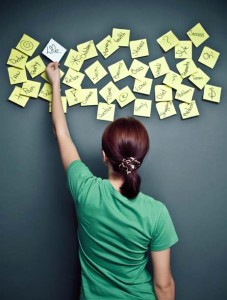 If you choose a paint color or a cat or a new car you’re not happy with, so what? Just choose again.

In the big picture, none of these are that big a deal. What’s the worst that can happen—it costs some time or money? It’s just time or money.

You’re not going to die regretting the time or money lost by making a choice that didn’t fit. But I’ve heard of plenty of people who regret not making brave choices they were afraid to make.

Humans are notoriously horrible at predicting our future emotions. For example, we predict that getting a raise or losing 10 pounds will make us really happy for a long time. They don’t. They make us pretty happy for a short time, but then we realize we’re the same person we always were except we have a few more dollars in the bank or a few fewer pounds weighing us down. After the initial excitement of the change, our emotions boomerang back to where they were before and we find something new to want.

Research proves the reverse, too. We expect things like losing our home or developing a physical disability to ruin our lives. They don’t. We’re remarkably resilient; after the initial blow, we adjust, bounce back, and return to our baseline happiness levels quite quickly.

So it doesn’t make much sense to do what a lot of people do—not make any choice at all because they’re afraid of making the wrong one. Endlessly debating options, causing themselves unbelievable stress and anguish, when they could just make a choice and if it isn’t all it was cracked up to be, they can choose again.

I’m not talking about choosing spontaneously or recklessly. And I’m definitely not saying you should just jump into something that’s harder to reverse, like marriage or a getting a large tattoo on your face. Do your best to look ahead and give your choices some thought.

But recognize that you can’t always predict the future. If the choice is between a (reversible) move to another city you’ve been dreaming about or doing nothing, take the chance.

If it’s between leaving your safe and comfy job for something you’ve always wanted to try but might not like, leap. If necessary, you can always choose again.

As long as it’s not a marriage or a large face tattoo, it’s probably worth jumping in and choosing something. It’ll probably work out wonderfully and if not, just choose again.

Can we really have it all?