Did you catch Bishop TD Jakes on Oprah’s Lifeclass a few weeks back? (You can watch most of it here if you’re interested). 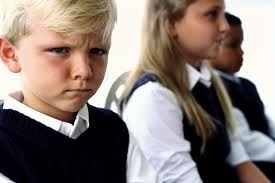 Jakes was talking to a woman about speaking her mind with her brother. Finally telling him how she feels so that she can move past her resentment and get on with her life. He said, “You can’t embrace your destiny if you’re holding on to history”.  Amen.

And then he said something else that really caught my attention, except I can’t find the exact quote anywhere. But it was something along the lines of “If you don’t have the conversation with the right person, you end up having it with the wrong person”.

Meaning, if you don’t speak your mind and get closure with the person who sparked your anger, you take it out on other people in your life. That anger and resentment is gonna go somewhere. It doesn’t just vanish on its own.

So you take it out on the wrong people. You make them wrong for what someone else did.

You carry it around with you for way too long and it ends up coming out in all kinds of unfair and unfitting ways.

I have a client right now who totally blows my mind. He just wrote the letter of a lifetime to his ex-girlfriend. She’s “the one who got away”. You know, that kind of ex-girlfriend.

It was the hardest thing he ever did. He came up with every excuse he could to weasel out of it. She doesn’t love him the same way he loves her, so why bother? She might show people, people he knows. She’s going to see his weakness and flaws and vulnerability.

We talked a lot about the real purpose of the letter. His intention for it, and what he wanted to gain from writing it.

We made sure he was coming from a clean place and that he was writing without expectations for her behavior and without an agenda for her. He understood that writing the letter was his business and her response to the letter is her business.

He ultimately told his ex the truth about everything in the name of
1) Being the kind of honest man he wants to be (don’t you just love that?) and
2) Making amends so he can leave it behind.

He doesn’t want all that fear and vulnerability following him into yet another relationship and spewing out at the next girlfriend, so he’s ending it here.

He is ending it here. He had the talk with the right person so he won’t keep having it with the wrong people. He can embrace his destiny because he’s no longer holding on to history.

Where can you address the right person so you stop addressing the wrong person?

Where could you stand to leave history behind?

How to speak your mind and still be Enlightened

Why I told the truth

PreviousPrevious post:Reader Question: Please help me stop being an approval seeker
NextNext post:Relationship 911 Tip: GIVE what you want to GET.