Why Tools and Practices Are Nice, but They Aren’t ‘It’.

I spent years feeling less-than because I wasn’t a regular meditator. 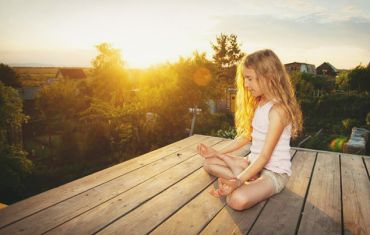 It just seemed so appealing. So magical.

There you are in stillness, tapped into something far deeper than your typical, mind-manufactured experience.

Feeling at one with all of life, in complete peace and tranquility. Insights and creative ideas flowing through you.

Wayne Dyer said people around him glowed after his 90-minute meditations. He could see their energy field. I wanted that.

Deepak Chopra talked about the boundaries between himself and others blurring; he didn’t know where he ended and the world around him began after hours of daily meditation. I wanted that too.

Madonna said meditation was better than any drug she had ever taken. Um…yes, please.

On a flight to Las Vegas in 2001, as I listened to my umpteenth Deepak Chopra lecture about this magical practice, I swore to God and myself that I would not only become a regular meditator, I would become the best meditator anyone had ever seen.

I was going to rule meditation. Master it. Beat it into submission if I had to.

I would escape this ho-hum human existence through the miraculous practice of meditation. I’d breathe my way to peace if it killed me.

You’re seeing the irony I missed at the time.

So after a markedly non-meditative weekend in Vegas, I flew home ready to begin my new life in a Maharishi-caliber trance.

I got out my candles and meditation pillow. I set up my space.

And it sucked. It was hard and I hated it.

My mind filled with uncomfortable feelings and cruel thoughts that—despite my Dyer and Chopra obsession—I didn’t know weren’t me. Deepak said meditation would reveal my true self. If that was my true self, I had bigger problems than I thought.

I tried to stick it out. I had willpower in spades and it was time to marshal those resources. But I didn’t last long. Just one-super-quick-cigarette-break turned into half a pack and some leftover pizza I was not hungry for.

The thinking that filled my meditating mind as I sat on my mat was uncomfortable, but that was just the beginning. The thinking that moved through me in the days that followed was even worse.

See, I was hungover but excited and hopeful on that flight home from Las Vegas. I thought I had found a way into the life I wanted. Meditation was going to be it.

But I had been down this path many times before and none of them were it either. The magic pill/technique/seminar/insight that was supposed to bring freedom from anxiety and habits never did.

Each it led to a spike of hope followed by a crash of despair.

Why do we force and guilt ourselves into practices that feel like such an uphill battle?

Why do we push ourselves to continually do things designed to bring about wellness, when our doing of them brings about the opposite?

Part of it is that we think we’ll work our way ‘over the hump’. If we keep at it, it gets easier.

That’s actually true with a lot of things—most behaviors do become easier with practice. If we can just suffer through the hard part, we reason, it’ll be smooth sailing later.

That’s part of it, but I think it’s much bigger than that.

What it really comes down to is that we want to feel good, and we think a tool is necessary.

I wanted inner peace and freedom from habits and anxiety and I believed I needed something to get me there.

Freedom and peace looked like accomplishments; the output of discipline and focus. How else does one accomplish things in life? You go out and do things, I thought at the time. You add things…like tools, practices, skills, degrees, achievements…

It was like dumping out a box of a hundred thousand keys and saying “one of these will the open the door to freedom”. You better start trying keys, right? The door isn’t going to open itself.

But what if the door actually does open itself?

Wellbeing practices are unlike bulldozers

If you’re trying to move a huge quantity of heavy dirt, a bulldozer is probably what you’d want.

There are a few other tools that would also do the job, but you actually need something. The dirt isn’t going to move itself because that’s not how dirt works.

If you want mental or emotional “movement”, you don’t need to find the right tool because inner peace is what you already are. The job is done. The end result is already there.

The only thing that can obscure your experience of that freedom and inner peace is the transient thoughts and feelings that happen to be passing through your mind in-this-very-moment. The “thought clouds” floating by obscure the sun that’s always there.

You don’t need a tool to move clouds because the design of nature is such that clouds move on their own, naturally revealing what was always there behind them.

Thought and feeling “clouds” move on their own too, naturally revealing the freedom and peace of mind you’re looking for.

So why don’t we feel that freedom and peace of mind more, you might ask? Because we’re busy thinking and identifying with our thoughts instead.

We’re confusing the weather with ‘us’.

We’re missing those breaks of sun, or discounting them as a fluke because we think we are the weather rather than the sky.

And that distracts us from the fact that we don’t need tools.

In my life at that time, I thought the hum of anxiety was who I was, my default setting. In that misunderstanding, it was easy to write off moments of peace.

I believed that wellbeing came from doing and adding the right things so I constantly, understandably busied my own mind with more practices and additions.

I kept dragging in clouds and wondering why I couldn’t see the sun.

The craziest, most unexpected thing happened when I saw that the peace and freedom were the backdrop—always already there—and that no tools were needed to excavate them.

Over time, I started feeling them a lot more.

My mind stopped searching for tools and practices and it became a lot quieter. I was naturally seeing more of the benefits I thought only tools could bring.

With this paradigm shift, it now looked like the anxious, habitual thoughts I had identified with were actually the flukes. I didn’t fear or pay so much attention to them because I deeply felt the difference between my true identity and that temporary stuff.

Do you know what else is crazy? I started enjoying various wellness practices in a brand new way.

Seeing them as optional changed my entire experience of them.

Now, I practice yoga almost every day with very little effort. I simply wake up and go because I truly love and enjoy it.

I still don’t meditate. I haven’t come to enjoy that one yet.

But I do spend life in a more meditative state and I’ll take that over seeing energy fields and blurred boundaries any day.

If you’d like to hear more about living in a meditative state without the mat, please join me and my friend Clare Dimond on our free webinar, Beyond the Practice: Well-being and Wisdom, No Mat Required. We would love to have you!