We were at dinner with friends the other night—our friends (another couple) and their teenage daughter. 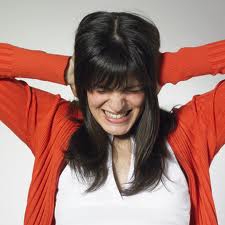 Our friends had just returned from a vacation where they left both teenage daughters at home. I asked the one that was having dinner with us, “So did you and your sister throw some wild parties while your parents were gone?”

As soon as I asked the question, her dad covered his ears and said, “La, la, la” so as to avoid the truth.

Which got me thinking about how much I “La, la, la” in my own life when I don’t want to know the truth about something.

Like cash, truth is king. Truth allows you to practice acceptance which you probably know is the cornerstone of all harmony. Accepting the truth allows you to move forward. Truth sets you free.Truth—even when it’s unwanted—has an undercurrent of peace.

So truth is usually a good thing, even when it’s painful. But I’ve been accused on several occasions of being an advocate of “La, la, la”.

Like how I won’t watch the news or listen to people talk about dogs or babies dying. How I have no clue what the murder stats are in Chicago, even though some of that stuff is happening in my own backyard.

And what I’ve realized about this is that if it’s something I can’t or am not willing to do something about, I’d rather “La, la, la”. Sure, the honorable choice might be to educate myself on the murder stats and volunteer to help the cause, but I’m not being led toward that. Thank God other people are inspired to do that work because I’m really not.

So if it’s not going to help me feel peace and/or move forward in life, I’d rather not be energetically drained by the miserable details.

I’m guessing that’s exactly why my friend “La, la, la-ed” rather than listened to the truth about his daughters’ parties. Their girls are 17 and 18, super sweet, responsible and respectful. He trusts them so knowing that they may have had a party wouldn’t serve him in any way.

You have to figure out what you need to know and what you don’t. There’s always a trade off.

Sometimes knowing the whole truth just makes you feel crappy and the pay-offs of truth aren’t worth it. Many times though, knowing the truth will be worth the trouble it might cause.

The case for changing your environment

Releasing it? Or Avoiding it?