From nothing, something. (One of my huge a-ha moments).

Who are you, really? 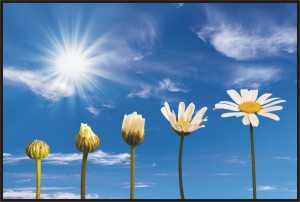 I think it’s a pretty safe bet that if you find yourself reading these words right now, you see yourself as something much bigger than a collection of blood and guts and skin and hair. You’re obviously not your body.

It’s probably just as likely that you don’t view yourself as your brain, or even your mind. You can be aware of your mind so what’s that part that is aware? Perhaps that aware part is who you really are?

I’d like to share with you something about thinking that floored me when I first heard it.

It’s that you—who you really are–doesn’t think. The real you…that awareness, soul, universal energy or whatever it is that you truly are…doesn’t think.

Duh. It seems so obvious now. Awareness doesn’t think, brains think. Minds think. But you’re bigger than brain or mind so all of that mental chit chat…it’s not actually yours.

You’re not doing it. It’s being done through you. You have no actual ownership of it.

Thought arises within all of us; it just shows up, from who-knows-where. I suppose the energy that causes thought to arise is the same energy that makes flowers bloom and earthworms regenerate and 5 minute old babies root for their mother’s breast.

Thinking occurs to you, but you aren’t thinking. So every time you show up for our coaching session and say “Why do I keep thinking these awful thoughts?” and I remind you that thoughts are useless and neutral (not awful), it’s actually even better than that.

And every time you email to say, “I wish I could change the way I think about this”, you’re just a little off in an extremely important way.

You aren’t having any awful, neutral, useful or useless thoughts at all. They are occurring within you, as they occur within each of us, but you aren’t doing it. They aren’t yours.

You are only the witness to them.

As I’ve said many times before (yeah…sorry about the repetition but it’s for what I only assume is your own good), it’s so much less personal than you think.

Sure, you can purposely focus your awareness and experience what feels like deliberate thinking about a particular topic. We do that all the time. But those thoughts still originate somewhere and from what I can tell, it’s not from anything you do.

So relax. You don’t have evil thoughts about feeding your neighbor’s barking dog a bag of dog-toxic M&M’s, those thoughts occur within you. You’re not generating them, you’re just attaching to them and identifying with them if that’s what you’re doing.

The more you get that you’re only the witness—the awareness within which thought appears—the easier it is to not identify with them and give yourself a break.

There is nothing wrong with you or your thinking because it’s not yours to begin with. It’s so much less personal that it looks.

PreviousPrevious post:Why outside-in seems so compelling (and why it’s actually only superstition)
NextNext post:Showing Up Dumb