Projection is fascinating, isn’t it? 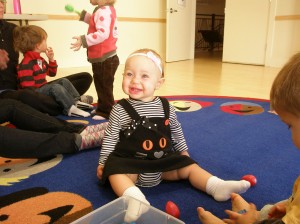 When I looked up the definition of projection I saw a lot of stuff related to television screens. So I’ll clarify—as if it’s necessary in this blog—that I mean psychological projection.

You know, where you attribute your feelings or thoughts to someone else. You assume they think and feel the way you do. (Okay psychologists, don’t write me letters of correction. I know that it was originally a Freudian defense mechanism and there’s much more to it. I’m generalizing here).

Or, more broadly, you see or treat them in a way that’s completely colored by your own stuff.

It’s so easy to project. Especially onto a nonverbal being. Who you’d really love to understand.

This could be why my husband and I used to project all over our poor dogs. I used to say, “Look how mad Buddha is that I have to go on this damn work trip. She really hates my boss and she can’t wait until I can quit this job; it’s written all over her furry little face”.

Then we had a baby. Pre-verbal. And we’re way more interested in her than in the dogs.

We take her to a music class every week. She’s one of about 10 kids and the youngest by far. The only crawler. The only one who isn’t talking yet, or doing much of the formal dancing, singing, or instrument playing.

Hubby and I let our personal stuff ooze all over pre-verbal Willow. Poor little blank slate gets all varieties of our projected crap.

Most of the music class is spent sitting in or dancing around a circle. When Willow crawls or wriggles away out of formation, more interested in being in the middle of the circle, or chewing on another kid’s pants, or trying to nurse from the chest of the woman (or man) next to us, I cheer her on.

You go, girl! Circle, schmircle—don’t conform to what everyone else is doing! Make a mess, break the rules, rebel!

Truth be told, I have problems with authority. I’m afraid to conform; afraid of being controlled, following the crowd, being boxed in, being average or even worse, being boring. Always have been. It’s all my stuff.

Hubby couldn’t be less like me in that respect.

He likes structure (which is what he calls the thing I call conformity). Loves to fit in, thinks things work better when you don’t try to rebel so much. He has no fear of being boxed in—his fear is of being an outcast, making waves, being disruptive.

So while Willow is unbuttoning the shirt of the mama next to us, his anxiety is through the roof. He’s trying to rein her in. I’m laughing and encouraging her to express herself.

You can imagine our conversation on the car ride home.

It’s a game of push and pull. I’m pushing her out front, giving positive reinforcement when she does something anti-norm, and he’s pulling her in, teaching her that good little girls don’t make a scene.

Push, pull, push, pull. (Before you report us to child services, we aren’t literally pushing or pulling our baby, or even openly disagreeing among ourselves. What it actually ends up looking like is a pretty healthy compromise where she wanders just outside our reach for most of the class. It just feels like anxiety-driven pushing and pulling to us.)

I have my ideas about the traits I want to encourage in her and he has his. Neither is right or wrong. Or even more right or more wrong. And it’s HARD for me to say that because I deeply feel that my way is better. But I know that it’s not—that’s just my stuff talking.

It’s all our stuff. Our patterns. And it’s so interesting to notice. To just watch how we do that; how we see the world through our highly personalized lens. And we have such wildly different prescriptions, yet as soon as we recognize and name the patterns and realize why we’re doing what we’re doing to our cute little innocent blank slate, it kind of drops away.

Just notice it for yourself. Where are you projecting? Can you notice it and let yourself relax a little?