On Posted on November 5, 2015August 7, 2020 by Michael Cuenco to Awareness, Being Human, Inside-out, The nature of thought

Are you Life’s Annoying Backseat Driver?

My husband is a major backseat driver. 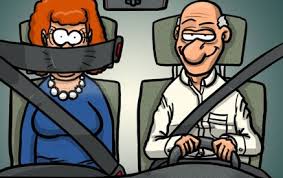 To his credit, he tries hard not to be. He is quiet while I’m driving. It’s not like he’s screaming directions or barking orders at me–at least not since that last mid-trip “discussion”…

But he definitely tries to drive from the passenger’s seat. Every time I pull into traffic he’s looking both ways with me, scanning for oncoming cars as intently as I am. I glance over to see his knuckles bright white from clutching the door so tightly. I see his right foot ever-so-subtly press toward the floor as we approach a red light.

He obviously has no real control from his seat, but he goes through the motions—mostly automatically and unconsciously—as if he is in control.

And as much as I tease him about being a vehicular control freak, this is what I do too. Not in the car, but in life. It’s what most of us do in much of life. We go through the motions, sometimes consciously, sometimes without realizing it, as if we’re behind the wheel.

We treat life as if we’re in charge of it, pulling the strings that ultimately make things happen. But we’re not driving the car of life any more than my passenger’s seat husband is driving our car. Life is unfolding as life unfolds. It isn’t about us.

The problem with backseat driving is that it is exhausting to keep trying to control a car you have no real control over. We get tired and we become frustrated and hopeless. Just like my husband’s hand becomes numb from clutching the door for dear life, we become numb. We throw our hands in the air and give up.

We stop trusting life because we see that it doesn’t always do what we want it to. What we miss is the fact that a lack of trust in life is actually the only problem we have.

When you see that you aren’t really driving and you decide to relax, enjoy the ride…maybe even make a game out of it…being the co-pilot feels exciting rather than exhausting.

You’re not passive or disengaged, you’re just letting life steer the car, using the power and influence you have (and you have a lot!) where it makes sense to use it, without needing to be fully in charge of everything.

You can recommend a particular route, or make a lane change suggestion. When you know that life is going to do what life does, there’s not much on those suggestions—you make them with the understanding that sometimes you’ll get your way and other times you won’t. It’s no different than my husband making a suggestion while I’m driving—I may listen, or I may not. But if he’s demanding, acting as if he’s the one with the ultimate say, he’s only draining himself. He’s shaping his own experience of the ride that already unfolding.

Life is a far better driver than we are. Not that we aren’t good too, but it’s the difference between relying on one person’s best thinking in a particular moment versus relying on the wisdom that created and powers all of life.

So when I’m behind the wheel, my husband would do well to make his suggestions kindly and patiently, knowing that he has some say, but that I’m pretty much going to do whatever I’m going to do. No amount of backseat driving will give him more control, and that’s okay because control isn’t really where it’s at.

Inner peace and acceptance are a better bet, and they are far more likely when we relax and enjoy the ride that’s unfolding.