On Posted on November 10, 2016August 7, 2020 by Michael Cuenco to Awareness, The nature of thought, Your true nature

Playing the Game: A short story about Willow and Buddha

While I was at the Three Principles Global Community conference last week, and really kind woman stopped me in the lobby. She told me that she loved the story below so much that she was going to include it in her holiday cards this year.

This kind woman’s love for this story got me thinking…it is a good one, isn’t it? Of course I love it because I was there and I remember it…Willow was only 3 (she’s turning 7 next month) and I can remember her face lighting up when she realized “I’m silly!” (you’ll see what I mean below) like it was yesterday.

But it also touches on something we all experience all the time.

So while I’m away, speaking in Europe this week, I’d like to share this old favorite from Being Human with you. Enjoy!

My girl Willow has the most active imagination of anyone I’ve ever met. She’s three, by the way. 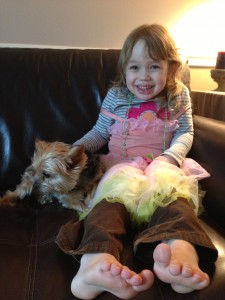 She makes up scenarios with details that would blow your mind. I have no clue where she gets this stuff.

She’s not only great at crafting stories, she also has the incredible ability to set aside reality and dive into her tales as if they were absolutely true.

This morning she was on my bed looking down at Buddha, our zen-like seven pound yorkie who was lying on the floor. (That’s Willow and Buddha in the picture.)

I asked Willow to jump off the bed and follow me downstairs for breakfast. She looked down at Buddha and in a very dramatic, damsel-in-distress voice, said “But I’m scared of Buddha, she’s going to get me! Noooo, Buddha, nooo!”

(Buddha, not amused, looks at me like, “This again? Am I supposed to growl and nip at her feet or can I go back to sleep?”)

Five minutes later, I was downstairs and Willow wasn’t. She was crying on the bed.

She wasn’t playing anymore. Or, more accurately, she forgot she was playing. She made up a story in her head and was so immersed in it that she forgot she invented it.

I went up to get her. Her face was soaked with real tears and she looked terrified. Of a sleepy seven pound dog named Buddha.

I reminded her that she was only playing a game where she pretended to be afraid of Buddha. That she wasn’t really afraid. Her face lit up and a huge smile appeared.

I said, “You forgot that you were playing a make believe game, didn’t you?” She laughed and said, “I’m silly!”

She is silly, but she’s also a lot like you and me.  She gets so wrapped up in her own thinking that she forgets she’s the one who invented it.

Adult Willows lose sleep over not living up to some beauty or brains standard, forgetting that they created the false standard years ago.

Or they believe the voice that says “The neighbors don’t like you”, “You made a mistake”, or “A glass of wine will fix that”. They forget that there is no correlation between a thought floating into awareness and that thought being true. Just like my Willow, adult Willows lose themselves in the story.

Those are person-level examples of buying into the illusion of thought. I also happen to believe that all of life is an illusion in a similar way.

We are connected to every living thing, but we forget. We’re playing a game where we inhabit human bodies and brains that make it appear as if we’re separate. Different sexes, different skin colors, different beliefs, as if any of that matters. Believing there is a distinct you, me, us and them.

We forget that the separation is all just part of the illusion. We forget that when the personal thinking and identification with “me” drops away, we’re all exactly the same.

Slowly waking up to the game is really fun too.

PreviousPrevious post:Overcome Any Habit or Addiction, Even the “Big Ones” (A Video Conversation with Micheal Hilton)
NextNext post:Dysfunctional Family Bingo: A Conversation about Expectations, Compassion, and Family