LSBC is now enrolling - save your seat!
On Posted on January 10, 2023January 9, 2023 by nipper to Awareness, Changing your brain, Inside-out, The Nature of Thought

No Need to Devour

There’s a worm addicted to eating
grape leaves.
Suddenly, he wakes up,
call it grace, whatever, something
wakes him, and he’s no longer
a worm.
He’s the entire vineyard,
and the orchard too,
the fruit, the trunks,
a growing wisdom and joy
that doesn’t need
to devour.
–This is How a Human Being Can Change by Rumi

He doesn’t do it by becoming a stronger worm with more willpower, able to overcome his cravings.

He doesn’t do it by becoming a spiritual or wise or enlightened worm.

He does it by seeing that he’s not a worm.

He only appears to be separate from caterpillars or humans or dandelions. When he sees he’s not a worm, he no longer has that underlying feeling of anxiety about what might happen. There is no outside force of nature happening to him. He is that force, the entire vineyard, and the orchard too.

With no underlying fear, no looking over his shoulder, no constant search for more to add…more protection, more love, more security, more, more, more…there’s no reason to devour grape leaves.

As a worm, devouring offered distraction from the feeling of limitation and separation. Now, discomfort is the candle reminding him he’s not a worm. It’s nothing that needs to be eaten over.

As a worm, there’s dissatisfaction, self-consciousness, and fear. As life itself–as the worm, the vineyard, the orchard, the fruit and the trunks–there’s a growing joy and wisdom that doesn’t need to devour.

A growing joy and wisdom is what you find beyond the physical and psychological realm; beyond thought, beyond feeling, and beyond fluid, ever-changing experience. I’m not saying you find joy and wisdom when you negate thought or avoid feeling or detach from experience. Joy is in seeing that it’s all the same. It’s all one energy. It’s all life, even when it shows up as a struggle.

It’s what’s real. Shift your focus from thought forms, physical objects, and mental stories to what’s aware of those things, and you’ll see.

When you aren’t trying to change everything, and you aren’t resisting what’s arising, and you don’t feel like a victim to what is happening to you…there is simply no need to devour.

You Could Have Everything You Want Someday When You Feel Lost – Part Two Spirit + Science The Quest To Feel Better Separation is dangerous. Good thing it’s not real.
PreviousPrevious post:EP234: A coaching session on feeling tortured by your mind
NextNext post:EP235: It won’t work for me 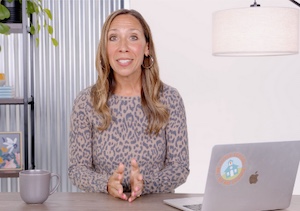 The Little School of Big Change LSBC is a program designed to help you overcome anxiety and unwanted habits without needing to rely on willpower or self-discipline. Class starts February 6th, 2023. Pre-enroll now and save $47!